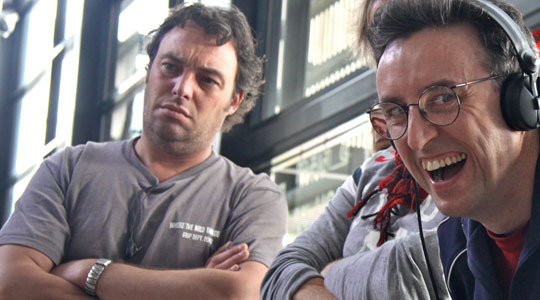 'Make sure you don't do anything to damage the Gristmill brand!' Wayne Hope said to me on my first day directing The Librarians. He was, of course, joking. Like me, Wayne had noticed how, these days, anyone and anything can be referred to as a brand. Justin Beiber, the swine flu, the concept of shame - brands, all of them, fighting for awareness in an overcrowded marketplace.

Series three of The Librarians, is the latest TV show to have the sizzling Gristmill brand applied to its shiny new arse. Gristmill is the production company that Hope and his equally talented missus, Robyn Butler, run from a shed in their back yard. Literally. The master tapes of Very Small Business are neatly piled beneath a sack of charcoal briquettes.

Up until Librarians III, I had been vaguely or tangentially connected with almost every Gristmill outburst, starting with their insanely cheap debut series, Stories from the Golf, which screened on SBS in 2004. The first three episodes of this microscopic comedy program were shot by Wayne, Robyn and anyone who happened to be standing nearby, on a home video camera. For the remaining ten, a small budget was scraped together, which allowed the production a few luxuries, like sound. I remember visiting the 'set' - an abandoned rental car lot - to have my audio-only guest role recorded in the back seat of a car by a bloke who, I think, was also doing the catering. 'There’s no way this shambles is ever going to air,' I thought. A year later, it was nominated for an AFI Award for Best Comedy Program.

That same year, Gristmill shot a pilot that made Stories from the Golf look like Apocalypse Now. Titled Small Business in Australia, it was directed by its co-writer, Gary McCaffrie, over one week, with two actors and a five-man crew in one room. I was roped in to operate one of the cameras, a job I hadn’t attempted since wagging school in the late seventies to shoot a prototype of Christopher Nolan's The Dark Knight on three rolls of Super-8 in the car park of the Hillcrest Tavern. For the next three years, this half-hour pilot was shopped around to every TV network in the phone book, and nearly 'got up' with at least two of them. 'What’s the problem?' I kept asking. 'Can't they see how well operated the second camera is?'

In 2007, Gristmill wheeled out its first half-hour series, The Librarians. Despite a lead character who seemingly made no attempt to be 'likeable', the first episode was watched by 1.4 million people. And, as the series proceeded, the horrible 'backstory' of Frances O'Brien was slowly revealed, as it would be in a drama program, not in a sitcom, where all the cards are usually laid on the table in ep one. What a great idea to take a character who would normally repel audience sympathy and continually plonk her into situations where moral fortitude is called for. It’s a gift that is still giving at the end of the third series. And for those who didn't care about any of that, there was Roz Hammond's bottomless shonk and Bob Franklin's thwarted dream to be a jockey. Although I had nothing to do with this series, I was married to the show's first assistant director and so felt as though I were living through it with her. Many was the day she'd come home shaken and traumatised by one of Wayne's 'shower scenes'.

The success of The Librarians led to Very Small Business, as it was now titled, finally getting the go-ahead in 2008. I made Gristmill aware of my availability as second cameraman, and it was only my complete lack of professional training, skill, reliability, flying hours and union credentials that prevented me from doing it. I did, however, appear in a short scene (written by Gary McCaffrie) for the DVD extras, in which I am insulted at length by the frankly questionable Don Angel. I think it's a brilliant series but, unfortunately, some people didn’t get past the first episode, which, being based on the original pilot, was necessarily claustrophobic. The show 'opens out' a lot after ep one, and the fifth episode, where Don Angel reluctantly visits a therapist, plays like a really funny episode of HBO's In Treatment. Despite a devoted following and a shitload of AFI nominations, a second series of VSB was never commissioned, possibly because of the (some would say) shoddiness of the camerawork.

Two thousand and nine brought season two of The Librarians, which became the very first Australian comedy series to be released on Blu-Ray. This, I assume, was due to the brief appearance, in episode six, of myself as Vince Colosimo's boyfriend. Colosimo (all hands, incidentally) is blown off the screen by my classic line, 'What happened to your head?', rendered ever more poignant when viewed in Hi-Def. For months afterwards, I would be asked by radio breakfast crews how I 'approached the challenge of gay acting'. 'What did you do?', they asked, 'to look so authentic?'

'Took off my glasses,' I replied.

The Middleton Interactive Learning Centre gang were again a hit, and it was agreed by all that there had been too long a gap between series one and two. The 'Previously on The Librarians' recap at the beginning of the new series had run longer than the episode that followed it. Work immediately commenced on the third series and, in keeping with the view that 'eight is the new six', Team Gristmill decided that this one would run two episodes longer. And that maybe those two extra shows should be overseen by Vince Colosimo's gay boyfriend.

So, how did that turn out? You'll find out in five, and again in eight, weeks from now. That’s right, the mad bastards have let me drive the series home. I can't give too much away about the big finale, save to say that fans of Glee will not be disappointed and that Terry keeps his pants on.

One day on the set, I turned to script supervisor Ted Green, a man who’s seen it all in this business, and said, 'How fucking good is this?' meaning the cast, the scripts, the crew, the whole damn thing.

'Now you see why all these people have crawled over broken glass to be here,' replied Ted. 'To work with them,' he said, gesturing to the couple on the monitor, noisily simulating intercourse in the next room.

I'm not sure about the broken glass, but I happily fought through three weeks of bronchitis, a week of gastro, a prescribed bloodletting and two broken ribs on the set of The Librarians, and I'd do it all again tomorrow, just to do the scene where a Midnight Oil cover band's crazy dream finally comes true.

But I've said too much.

This article first appeared on the most excellent website, The Scrivener's Fancy. It's written by our good friend and collaborator, Tony Martin, and kind of gives you a brief history of the company.