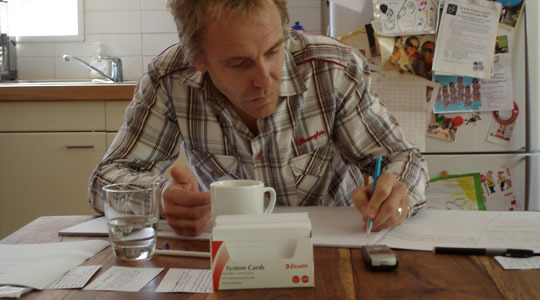 Getting My Head Read.

'Would you like any music with your MRI, Mr Hope?' asks the extremely chirpy guy from Dorevitch Health. It's not a question I expect while I’m pulling my pants off in a small hospital cubicle. 'Are you packing any titanium?' maybe, but music with my MRI? 'No, but I’ll have the rocket and pear salad.' There is silence from the other side of the cubicle. Don’t piss him off, I think, he'll be the one controlling the radiation dial in a few minutes. He eventually pipes up again. 'Mr Hope, if you could pop on the provided gown with the opening at the back and, please, leave your underwear ON.' Clearly, the underlining of 'please' and 'on' indicates there have been nasty free-balling incidents here in the past.

There are three A4 sheets of paper stuck on the back of the door. Beneath 'Popular' sit Beyoncé and Robbie Williams. 'Rock' offers Linkin Park and Maroon 5, while John Farnham is under 'Easy Listening' - a heading I would dispute. My anxiety is getting worse by the artist. Several of them, curiously, are blacked out. Why would some be dropped? And what selection criteria would see John Denver remain?

I’ve signed up as a controller for a twelve-year study into Huntington’s disease. HD is a progressive neurodegenerative genetic disorder, which affects muscle coordination and leads to cognitive decline. It's kind of your dementia hamburger with the lot, and my dad's got it.

I'm being backed head first into the dark MRI tunnel, which has enough radiation to warrant Karen Silkwood setting up a picket line out front. There's a crackle in my sterilised headphones and up chirps Mr Brightside: 'Okey dokey, Wayne, the first scan's an easy one; about a minute and a half.' His voice again assumes the 'leave your underpants on’ tone. 'Now, remember, please don’t move.' Move? How can I move? My head has been locked into position by some kind of Hannibal Lecter facemask and, oddly, I'm actually starting to feel a wee bit serial killer. Within the mask are several angled mirrors through which I can see the control room. Dirty Mr Dorevitch is sharing a joke with a female co-worker. I'm livid he's not focused on me, but I calm myself by thinking he must be retelling my rocket and pear salad quip.

I'm startled by the sound of an acoustic guitar before remembering that I have selected Johnny Cash, having thought that listening to simple country music would reduce my chances of thrashing about in panic. I have to be honest here: I don't really know the music of Johnny Cash. Watching the biopic Walk the Line is one thing, but having Johnny sing right into your skull during an MRI is quite another.

'Just me again, Wayne. The next one is a bit longer, about six minutes forty seconds; here we go.' Okay, this guy is really starting to annoy me. Why is he trying to sound like he’s on breakfast radio? If he asks me to 'beat the bomb’, I’m ripping the mask off.

The last time I saw my dad was a few months ago. We travelled interstate for a family holiday and kicked it off with a visit to his state-run nursing home. ('This is the best holiday ever,' I didn't hear my daughters say.) I hadn't seen Dad for a long time; I think the last time my whole family was together was in the Supreme Court. Currently, no one is rallying for a reunion.

A bizarre, squat, Scottish nurse introduced herself as my dad’s special friend and led us to him. I was utterly shocked at the sight of him. The violent bully of my childhood was reduced, quite literally, to a contorted, gaunt figure strapped to a bed chair. My two girls were gobsmacked too; the youngest, understandably, took backward steps towards the wall. My wife, sensing I was imploding, put one hand on my back and started polite conversation with my father. He could only grunt and moan and say a single sentence, 'How ya goin?', which he blurted randomly in an Australian accent. (This is odd, as Dad is from Holland and has always had a thick Dutch accent that made him sound like he was trying to clear phlegm.)

'Wood ya like ta feed yerrr da?' Nurse Scotty stuffed a small baby-food container of mashed apple into one of my hands and a spoon into the other. Before I could politely reply, 'Get fucked, do you have any idea the havoc this bastard wreaked on my life?', she began instructing me how to straddle him on the bed chair to lock him into position. Then, how I must lean in very close to his mouth, insert the spoon deeply and wait for the natural swallowing reflex to kick in. Up real close, I couldn’t believe what I saw. It was Don Draper’s mouth fifty years later, a true showcase for the good people that made the 100,000 Kent cigarettes that passed through here. Four black teeth remained in the ruins.

I keep a close watch on this heart of mine
I keep my eyes wide open all the time.
I walk the line.

I was walking a strange line between feeling pity for a dying man and an overwhelming urge to punch him in the face.

The MRI part of this study is to look at differences in brains that carry the HD gene compared with those that don't. The hope is that early detection of changes will lead to clues for early treatment, hopefully resulting in a short-circuiting of the full-blown symptoms. I suspect my motives for being here are painfully naïve: prevent these 'bad' brains and you’ll prevent 'bad' dads.

'That’s great, Wayne, really nice work.' Is he seriously complimenting me on the way I lie down? ‘Next one's eight minutes even.' I should have picked Sade.

After the visit to my father we continued our family holiday, a road trip up the West Australian coast. Unbeknownst to me, I'd been in a stinker of a mood for four days. My wife tried to help by booking a table at a restaurant because it was my birthday. Trouble is, we were at Monkey Mia, which is really just a caravan park punching above its weight. If it wasn’t for those five or six dolphins that rock up every morning for the all-you-can-eat buffet, I suspect it would just be a possible setting for a Tim Winton novel. Enough busloads of tourists warrant a single restaurant staffed by international backpackers. I wanted to leave the second I finished my main meal. 'Let's stay for dessert,' my wife suggested. 'I don’t want to.' 'No, come on, it’ll be good, really,' she pleaded. Before I could even start to sulk properly, our pimply German waiter was by my side with a bowl of melting ice cream and two burning sparklers. He launched into ‘Happy Birthday’, thick German accent and all, and I must have looked completely disgusted because my wife started giggling immediately. One by one the girls stopped singing and fell about laughing too. This just left the earnest, pimply German, nervously looking me in the eye as he sang the crescendo, 'Huppy Birstay to you'.

Next day, my wife suggested a walk and gently offered the view that my knotted knickers might be the result of not coping with the mixed feelings I might be having. 'I'm not sure what you’re on about,' I said, whilst taking an intense, newfound interest in WA's fauna and flora. 'The fact that you feel sorry for him and hate him.' I tried to take a few steps further towards an interesting shell but there was little resistance; I was a mess. She held me for ages and I pretended it was a romantic hug, not a needy one, as some other people passed by.

'And the lucky last is a quickie, Wayne, one fifty-five, matey.'

Okay, I won't take a gun to Mr Dorevitch. It can't be easy sliding vulnerable people in and out of that million-dollar microwave every day. And, okay, I won’t punch my father in the head but I think it's okay to feel like it, even if his slow, horrible death makes me desperately sad. And, okay, I know I'm going to suffer anxiety by having an MRI and I still want to come back next year.

I actually feel fine. I just wish Johnny Cash would lighten up.

This article first appeared on the most excellent website, The Scrivener's Fancy.