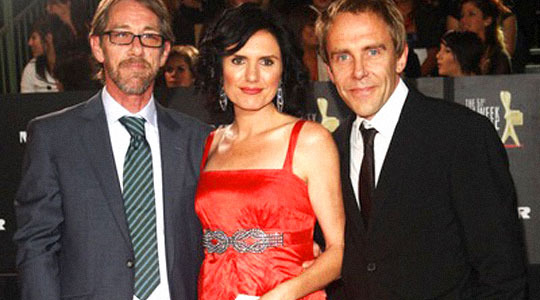 Letter to My First Employer.

In 1978, everyone knew that a babysitting job was the holy grail of a pre-adolescent existence. Nineteen seventy-nine was a different story. That was the year the horror movie When a Stranger Calls was released and babysitters everywhere, terrified that a crazy man was chopping up the children, all applied for jobs at Target. But 1978 remained a lunatic-free, halcyon year for babysitting, and I'm writing, a little tardily, to say thank you for giving me my first taste of it.

This may seem like a dreadful admission, but I can't remember your children's names; in fact, I would be lying if I said I even remember what sex they were, let alone what they looked like. This is, no doubt, in part, due to my innate negligence, but also because they were always asleep by the time my duties began.

I'm sure this was an enormous relief to you and your wife. I'm sorry, I can't remember her name either, but I do remember she was exceptionally pretty, a lot like Dolly Parton, except she was tall and had a small chest. And wore glasses. Maybe she reminded me of John Denver. No, she definitely had big blonde hair and was generous with her makeup application… Anyway, the point is that your children being asleep must have been not just a relief but a requirement, as I wouldn’t have known what to do with them if they had been awake, given that, at twelve, I was only a couple of years older than them myself. If they had woken with a headache or sore tooth, my solution would have been to play Monopoly.

Luckily, for all of us, they never did wake up, and I was free to luxuriate in your lounge room, as its 1978 décor intended. Alone, I could revel in the white fluffy carpet, the black leather lounges and the mirrored tiles all over one wall. I had often imagined myself as belonging to that couple on the private plane, lathering themselves with Cussons Imperial Leather and ordering the pilot to Tahiti, and here, in your lounge room, I pretended this was where I, and my beautiful-smelling parents, lived. Truthfully, though, Kenny, the fantasy never lasted long. While I knew the choice of mirroring just the one wall showed real restraint, your lounge room overwhelmed me. And even though my family, sadly, only ever washed with Sunlight soap, that couple on the plane did seem a little creepy.

If the lounge room itself wasn't entertainment enough, in the corner of the room sat an enormous television. Not only was it an enormous television, which, unlike at home, didn’t require a pair of pliers to change the channel, it was also an enormous colour television. The first time I clapped eyes on it, I knew my life had changed. Now, I could go to school and tell Mandy Metcalfe that I, too, had watched colour television. And this time it wouldn’t be a lie. For once, too, I would be able to knowingly join in the conversation about Charlie's Angels, having actually watched it, instead of The Duchess of Duke Street. Like drinking lawnmower fluid, Charlie's Angels was strictly forbidden in my house. Despite my protests that Sabrina, played by Kate Jackson, wasn't frothy like the others, that she had real mettle, which Charlie obviously depended on in tricky cases, my mother maintained it was crap. Easy for her to say, she didn't have to go to school with Mandy Metcalfe.

Just when I thought it couldn't get any better than being on a black leather couch watching colour television, catching sideways glimpses of myself in your one mirrored wall, I would remember that your lovely wife (again, apologies for the memory lapse, I want to say Janelle?) had ushered me into the kitchen before leaving and invited me to help myself to some snacks. 'Did she say "snacks",' I would think to myself, 'surely she meant last-meal-before-you-die?' as I poured myself a Coke. Who had Coke in their fridge? Wasn't Coke a treat for everybody, limited solely to an outing to the Chinese restaurant, and limited to one glass, if you wanted to order the fried ice-cream at the other end?

I hope you don't think I'm placing too much emphasis on the sweet component of the job, but you must understand my home. We were inevitably the family in the supermarket queue behind the woman whose trolley overflowed with Milo, jam, white bread and Coco Pops, while my sister and I stared dismally at my mother’s selection of rolled oats and Vogel’s loaves.

You and your family, I understood, pushed the trolley in front of ours. There was no doubting that you, Kenny, had made good. And was I glad. I liked you a lot. You were larger than life, a ginger-haired, pink and freckly Dennis Lillee. Without the fast bowling, but with the moustache. You had an infectious giggle and made other people laugh, and I remember that when your family moved from New Zealand into a house a few doors up, my parents were delighted to meet such a bon vivant. And to use the term 'bon vivant'. Unlike the rather dreary Edgar family before you, who came for a Christmas drink but, on arrival, declared that they were happy to have a drink, but, as they were Jehovah's Witnesses, it wouldn't be anything to do with Christmas. You can imagine that put rather a dampener on festivities, as the adults sipped their beverages, steadfastly ignoring the Christmas tree next to them. Meanwhile, the little Edgar children stared at our gaudily wrapped presents, guarded by the plastic reindeer whose red-light nose blinked on and off depending on whether the batteries were flat, and I stared at them with abject pity. Did they even know who Rudolph was? We may have had a staple diet of brown bread and porridge but at least we had Christmas. How insane were their parents? They had made some gruesome link between Christmas and religion and now they had to suffer for it?

Thankfully, Kenny, you were nothing like the Edgars. You were, sensibly, a Catholic who chucked in a midnight Mass at Christmas then got up and watched your kids open shitloads of presents. You were a worthy recipient of the spoils of capitalism, in my eyes, mostly because you were willing to share it with me.

An opinion that was confirmed when you drove me home at the end of the evening in your silver Porsche. Fast. Obviously, it was a Porsche. And you were drunk.

I know it sounds bad, Kenny, but I don’t blame you. It was 1978. It was a crime if you weren't driving home drunk. A bit like the muu muus that everyone was wearing that year, 1978 was loose, colourful and would be remembered with guilty regret as time went by.

Things were different then. Things were freer. Kids were given big responsibilities. By the time I was employed by you, at the age of twelve, I’d been catching the bus home by myself for four years. Yes, more than once, I flew off the bus in a panic, having dreamily floated a few stops past mine. Yes, one afternoon, two older girls, with truculent hairstyles that signalled their intentions (black at the back, peroxided fringe up front), stubbed a cigarette out on my wrist. Yes, Bob the bus driver once asked me to show him more than my bus pass, but these were mere blips on my radar of independence. It never occurred to me that life should, let alone could, be any different. Ironically, I did not see myself as the architect of my destiny; I was an observer in all these events, still a child, to whom things seemed to happen, rather than me being responsible for anything at all.

Which is why I was thrilled to be blithely entrusted with the care of children I barely knew, and exactly how I felt at three am as we went careening through the dark streets, my bottom unfamiliarly close to the ground in your Porsche. Vaguely aware that my life was in mortal danger yet already planning how and when I would tell Mandy Metcalfe that I had earned twenty dollars this evening.

This article was written for Women of Letters.