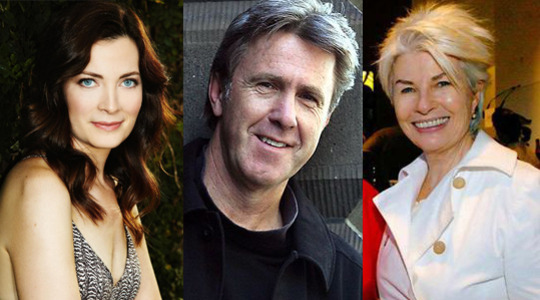 We started filming our new show this week with a cracking lead cast (pictured above).

Here's the ABCTV Press Release that went out today. We'll keep you updated during production, especially since Tony Martin, king of the tweet pipe, is involved.

ABC TV is pleased to announce that filming is underway in Melbourne on the new eight-part comedy series for ABC1, Upper Middle Bogan, which tells the story about two families living at opposite ends of the freeway.

Created by Gristmill’s Robyn Butler and Wayne Hope, (The Librarians and Very Small Business) and directed by Wayne Hope and Tony Martin, Upper Middle Bogan will be filmed on location between Brighton and the Calder Raceway in Melbourne over seven weeks, and will screen on ABC1 in 2013.

When Bess Denyar, a doctor with a posh mother, an architect husband and twin 13-year-olds at a private school, finds out that she is adopted, she is stunned, but even more so when she meets her birth parents - Wayne and Julie Wheeler. If that’s not enough to digest, Bess also discovers that she has siblings - Amber, Kayne and Brianna. The Wheelers head up a drag racing team in the outer suburbs, and are thrilled to discover the daughter they thought they had lost.

Wayne Hope says “Although I think Top Fuel drag racing is a brilliant setting for a comedy series, the races do only last for 4.8 seconds, so I still need another 27 odd minutes to fill an episode. Hopefully Robyn has an idea for that bit.”

Robyn Butler says “Wayne mentioned drag racing and I immediately thought: Robyn Nevin! I’m pretty sure now the rest of the show will write itself.”

ABC TV Executive Producer Debbie Lee says, “Robyn and Wayne have once again created original, entertaining and extremely funny characters that inhabit two very different worlds. We are thrilled to be able to share their turbo charged lives with our audience next year.”