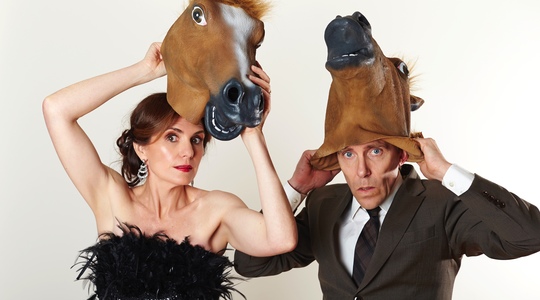 Back in Very Small Business

Back in Very Small Business finds Don (Wayne Hope) at the helm of the World Wide Business Group, where he and his business partner Ray (Kim Gyngell), have found success in their ‘Don’s Dirty Dog Wash’ franchise. Encompassing five other small businesses, the WWBG is staffed by an ethnically diverse, gender fluid, psychologically fragile menagerie, all hired on government subsidies. While Don enjoys the spoils of his burgeoning empire, he continues to be plagued by the consequences of both his morally questionable business practises and his delinquent emotional life.

Back in Very Small Business will feature a brilliant cast, showcasing some brand new faces alongside some of Australia’s finest comic performers. The full cast will be announced in December, when production begins.

Creators Robyn Butler and Wayne Hope said: “We’re extremely excited to be making Back in Very Small Business and we really hope there is room in the world for one more bombastic, emotionally stunted, shonky guy called Don.”

Featuring 8 x 27min episodes, the comedy series will be produced, executive produced and written by Wayne Hope and Robyn Butler , with Butler also taking on directing duties. Greg Sitch and the ABC’s Rick Kalowski are the executive producers, with Gary McCaffrie completing the writing team. The comedy series will be broadcast on the ABC, with international sales to be handled by Super Java Distribution.

Collaborators and Gristmill co-founders Wayne Hope and Robyn Butler are prolific creators of Australian television and films. Their ABC comedy series Upper Middle Bogan won Best Television Comedy series at the 2016 AACTA Awards for the third season, and has enjoyed multiple AACTA and Logie Award nominations across all three seasons. Their children’s ABC3 series Little Lunch won the 2016 Prix de Jeunesse Award in the 7-10 Fiction Category, the 2017 Logie for Most Outstanding Children’s Series, and was nominated for an AACTA award.

“Gristmill have created an enviable catalogue of exceptionally funny, irreverent and incredibly clever comedy content that is uniquely Australian,” says Sally Caplan, Head of Production at Screen Australia. “We expect Back in Very Small Business will be an equally successful outing for them and commend the producers for updating the characters in this show to reflect a contemporary, diverse audience.”

"We're delighted to partner with the ABC to see the return of Don Angel, Australia's most inept businessman, for Back in Very Small Business," says Jenni Tosi, Film Victoria CEO. "As leading producers of comedy for audiences and screens of all sizes, Robyn Butler and Wayne Hope will once again bring the sharp, satirical and laugh-out-loud funny moments for this Melbourne-grown comedy and we look forward to its return."

Back in Very Small Business will commence filming in December and into the new year, and will air on the ABC in 2018.

ShareTweet
/ Back to Words