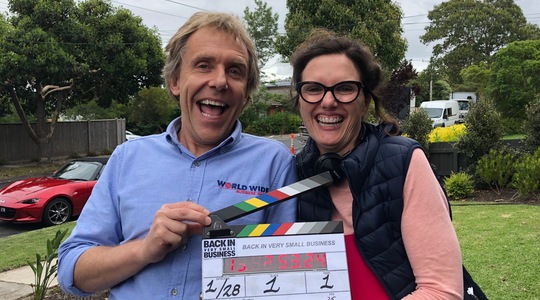 Gristmill’s New Satire for the ABC

CAST ANNOUNCED FOR BACK IN VERY SMALL BUSINESS

The eight-episode series starts principal photography today with Wayne Hope (Upper Middle Bogan, The Castle) and Kim Gyngell (The Comedy Company, Full Frontal) back as Don Angel and Ray Leonard in the re-imagined series, first introduced to audiences in 2008 with the AFI and Logie-nominated ABC series Very Small Business. Don is at the helm of the World Wide Business Group, where he and Ray have found success with their ‘Don’s Dirty Dog Wash’ franchise and are running five other small businesses, staffed by an ethnically diverse, gender fluid, psychologically fragile menagerie, all hired on government subsidies.

Rick Donald (The Doctor Blake Mysteries, 800 Words) is Cody and the lead on Don’s fashion empire with Aaron Chen (Aaron Chen Tonight) in the role of Don’s financial director, Kim, even though he’s still in his final year of University. Elle Mandalis (Head On, Nowhere Boys) is Olivia Micheledes who is Don’s part-time but most effective employee heading up Funny Dunny, a subscription toilet paper service. Rounding out the main cast in semi-regular roles is Rachel Gordon (The Moodys, Secret Daughter) as Bridget, Marg Downey (Full Frontal, Kath and Kim) as Yvonne, Jane Harber (Offspring, The Moodys), Pia Miranda (Wentworth, Time of Our Lives) as Don’s lawyer Sandi and Heidi Arena (Thank God You’re Here, Little Lunch) as Madeleine from the ATO.

Film Victoria CEO, Jenni Tosi said “We congratulate Robyn and Wayne as they get back into business with a terrific ensemble cast to produce the return of this entertaining comedy. We’re also thrilled to support Lisa Marie Corso as a writer’s attachment on the production where she'll be able to hone her screenwriting skills under the guidance of two of the best creatives in the business.”

Screen Australia’s Head of Production Sally Caplan said: “We’re thrilled to see Back in Very Small Business commence production with such an impressive cast of top-tier Australian comedic actors working alongside some of our most exciting new talent. This sharp satire looks set to be another hit for the talented team at Gristmill.”

ABC Head of Comedy, Rick Kalowski said “The amazing full cast Robyn Butler and Wayne Hope have assembled for Back in Very Small Business speaks volumes for their reputation as one of the most talented comedy production outfits our country has ever produced”.

Back in Very Small Business has principal production investment from Screen Australia in association with Film Victoria and will air on the ABC in 2018.