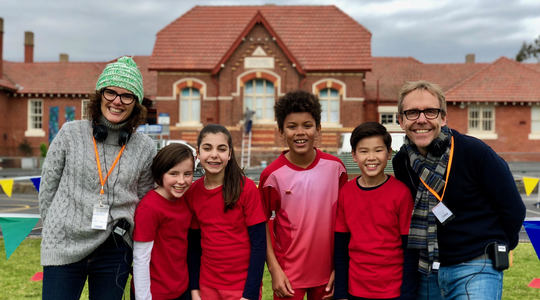 NEWS ALERT! 📢 We are making an exciting new show!

Following the success of its hugely popular and multi-award winning show, Little Lunch, Gristmill is thrilled to announce filming is about to commence on its new children’s comedy series:

Ezra, Maudie, Ava and Kyle are The Inbestigators. Operating out of the granny flat in Ezra’s backyard, these disparate kids are led by Maudie, a freakishly gifted observer of human behaviour, who manages to solve one thorny school or neighbourhood mystery after another. While every episode offers a compelling puzzle to crack, at its core the show is a character comedy with heart.

The Inbestigators will be filmed on location in Melbourne from July to November of 2018 and will screen in 2019 on the ABC in Australia and internationally on Netflix.

Gristmill co-founders Robyn Butler and Wayne Hope are prolific creators of Australian comedy who have found enormous success with Upper Middle Bogan, The Librarians and Very Small Business. Their upcoming comedy Back in Very Small Business will screen on ABC later this year.