And sentences. Sometimes even fully formed paragraphs to describe what we're thinking about, or have thought about, or have put no thought into at all. This is the internet after all. 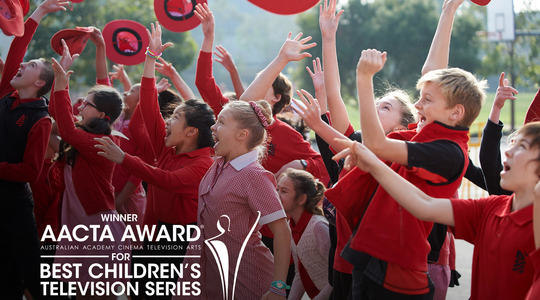 Gristmill’s New Satire for the ABC

CAST ANNOUNCED FOR BACK IN VERY SMALL BUSINESS

We are so proud to announce that Little Lunch has just won the 'Children's Jury Prize' at the Chicago International Children's Film Festival. You can find out more here thanks to our friends at the ACTF.

We are selling the original artwork from the Little Lunch opening titles, and ALL profits go towards the Smith Family's Learning For Life program! Click here to find your favourite artwork, but get in quick as they're selling fast!

Hats off to the Little Lunch team! We are very excited to announce that we have been nominated for an AACTA award for 'Best Children's Television Series'.

More exciting news. Our Little Lunch special The Nightmare Before Graduation has just won the 2017 Japan Prize for best primary series! Here is everyone’s favourite teacher ‘Mrs Gonsha’ (Heidi Arena) accepting the prize in Tokyo. As always, a big thank you to the ACTF for championing the show around the world.

Little Lunch has been nominated for an International Emmy!

Very excited to learn about this announcement overnight from MIPCOM in Cannes. The Little Lunch special, The Nightmare Before Graduation has been nominated for an award in the Kids: TV Movie/Mini-Series section of the International Emmy Awards Kids.

Back in Very Small Business

Executive Assistant needed in our stable.

Gristmill is on the hunt for an Executive Assistant for the incredibly needy Robyn Butler and the very demanding Wayne Hope so if you think you are the completely amazing human being we need who can make us happy and bring peace everywhere - fine, just the make us happy bit - then we cannot wait to hear from you.

We have released the scripts for both The Halloween Horror Story and The Nightmare before Graduation an iBook! All your favourite lines from these two half hour Little Lunch Specials mixed with loads of on-set photos and video galleries.